CCL and Dr. Rossano, our visiting graduate student, Raphaela Heesen, and The Bonobo Project were featured in an article about bonobos at the San Diego Zoo written by Jeannette DeWyze in the San Diego Reader. 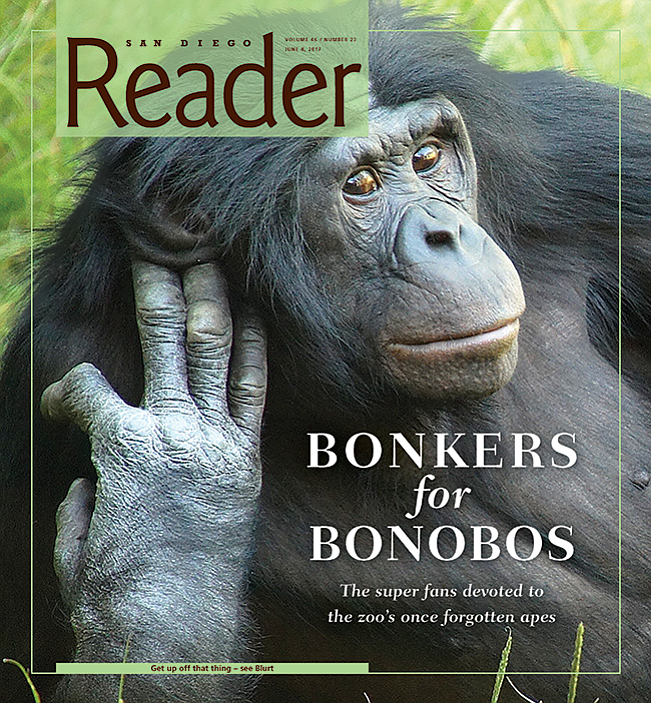 Although the San Diego Zoo isn’t currently conducting any of its own research on bonobos, a UCSD professor named Federico Rossano has launched a couple of formal scientific investigations involving the colony. A native of Bologna, Italy, Rossano joined UCSD’s cognitive science department in January of 2016. There he created the Comparative Cognition Laboratory to explore the factors that make human social life possible and compare them to the things that shape the social life of other animals. Rossano arrived with an extensive video database documenting how young great apes learn to communicate and interact. Since then he’s been expanding that database by sending undergraduate students to videotape Lisa’s three-year-old daughter Belle, as well as gorillas and orangutans under the age of four at the zoo and Safari Park. The goal is to learn more about “what it means to grow up as a baby bonobo, baby orangutan, and baby chimpanzee” — and to compare that to the experience of very young humans, Rossano says.

Rossano has undertaken an even more complex project along with a German Ph.D. candidate named Raphaela Heesen. The two scientists are focusing on activities that individuals engage in together. For humans, that includes talking, dancing, cooking, building things, walking together, and a myriad of other actions. Humans are very good at engaging in such “joint action,” Rossano says, and we have developed elaborate signals not only to initiate it but also to resume shared activities when they’re interrupted and signal that the end of a given activity is approaching (as when parties to a phone conversation start to wrap things up to saying something like “All right,” “Okay,” or “So…”). Although researchers have learned a lot about joint action among adult humans, they know less about when human children start showing a reliable capacity to engage in it and all its attendant signals. (Toddlers, for example, may talk on a phone but then drop it or hand it off abruptly.)

Even less is known about how and even whether other animals — including our closest relatives — engage in joint action. “What we know from the literature,” Rossano says, “is that there are signals for animals to initiate sex or play.” But do they signal when they’re about to stop participating in a shared activity? Do bonobos, for example, somehow communicate to each other, as humans do, “We’re going to go away from each other now”?

To get answers for some of these questions, Rossano plans to observe the behavior of (human) two- to four-year-olds in local preschools playing together over time. Heesen arrived in San Diego January 10 to train her attention on the local bonobo colony for three months.

“This group of bonobos has been studied for a while,” she told me when I met her late one afternoon in March at the enclosure. “We know a lot about their social bonds and hierarchy. So I had a nice research base to start with.” A third researcher was planning to work on chimps. (The San Diego Zoo collection has not included any of them for years.)

Heesen had wrapped up her day’s work when I met with her. This was a good thing; it’s difficult for her to carry on a conversation while she’s observing the animals. I watched her doing that on other occasions, and it looked grueling. To be able to capture a panoramic view of the group, she used two video cameras mounted on tripods. The presence of four different viewing portals spaced around the large perimeter of the bonobo enclosure makes it possible to see the animals almost anywhere they choose to hang out. But because they move around — sometimes every few minutes — this meant Heesen often had to pick up her cameras and scurry to a window that afforded a better view of them. For six or seven hours a day she did this, while also taking notes on an iPad about anything the animals did relating to any joint action — playing, grooming, copulating, and so on. Later she would upload each day’s video into a computer and review it, to see what she had missed.

“You make a lot of mistakes when you observe. There’s a handshake you didn’t see because you’re writing things down. Sometimes the interactions are very, very fast-paced.” Slowing down the video enables capture of many more details. “I’ve worked with apes before, and especially with chimpanzees, but I’ve never seen such intelligence,” Heesen commented. “Social intelligence, as in these guys. Never.” Still, she couldn’t yet draw any conclusions from her work. After a three-month stint here, her plans called for several more months of data collection. In an attempt to distinguish what was universal in bonobo society from the idiosyncratic culture of the San Diego Zoo’s group, she was planning to move next to a primate park in France. La Vallée des Singes is home to about 20 bonobos, and there Heesen was planning to use the same observational protocol she employed in San Diego. As a final step, she was hoping to travel in the summer of 2017 to Lola Ya Bonobo, a bonobo sanctuary just south of Kinshasa in the Democratic Republic of Congo.

Click the link below to read the full article and learn more about bonobos: www.sandiegoreader.com/news/2017/jun/07/cover-bonobos

If you would like to find out more about bonobos and how to help them, please visit The Bonobo Project. You can also donate to bonobos today